5th January - Disney Cruise Line have released a never-before-seen clip showcasing details of the stunning Grand Hall on the brand-new ship Disney Wish, scheduled to set sail in Summer 2022. The dazzling character statue at the base of the grand staircase on the new Disney ship is an iconic Disney Princess! Find out which Princess here

23rd October - The brand new Disney Cruise Line ship Disney Wish is now scheduled for its maiden voyage in Summer 2022! The ship will be slightly larger than the Disney Dream and Disney Fantasy, with 1,250 guest staterooms!

30th July - You can now book your Disney Cruise Line holiday for Autumn 2021! Disney Cruise Line will be returning to a range of favourite destinations, including the Caribbean, Bahamas, Mexico, Bermuda and Canada. You'll also have the chance to experience Halloween on the High Seas or Very Merrytime Cruises!

4th March - Disney Cruise Line has released their itineraries for the Summer of 2021. The Disney Magic will return to Europe visiting the Mediterranean at the beginning of the season and finishing in Northern Europe. The Disney Wonder will return to Alaska with 5-, 7- and 9-night itineraries. The Disney Fantasy and Disney Dream will continue their routes around the Bahamas and Caribbean including 5 night cruises with 2 stops at Disney Castaway Cay.

12th February - The Disney Wonder has embarked on an inaugural sailing from New Orleans, Louisiana. On departure of this first sailing, Princess Tiana, Prince Naveen and members of the traditional New Orleans Treme Brass Band gave a celebratory bon voyage! This limited season returns in 2021, visiting the Bahamas, Caribbean and Disney Castaway Cay. The Disney Wonder is home to Tiana’s very own restaurant, Tiana’s Place, with a Menu inspired by the flavours and ingredients of the Louisiana bayou.

7th February - Remy is one of the Disney Dream and Disney Fantasy’s adult-exclusive restaurants with subtle features to the Disney Pixar Movie ‘Ratatouille’ and Remy himself. The menu was created, in part, by Chef Arnaud Lallement who has been named by ‘Le Chef’ and voted on as one of the world’s best chefs. Book your Bahamian or Caribbean cruise now to see this beautiful restaurant and taste this incredible menu!

24th January - Star Wars Day at Sea is currently taking place onboard the Disney Fantasy for selected sailing to the Caribbean. Star Wars Day at Sea will be returning for 2021, taking place on seven-night Disney Fantasy cruises to the Caribbean from January through March. Feel the Force with fun costume celebrations, movie screening, trivia sessions and a ship-wide Porg-themed adventure!

13th January - Disney Cruise Line has released dates Marvel Day at Sea will return to the Disney Magic in 2021! Departing from Miami, these selected cruises will enable guests to meet their favourite Marvel Super Heroes and Villains as well as a host of Marvel themed entertainment. These dates are now on sale for guests to prepare for this fun experience at sea!

6th January - The Disney Fantasy set sail on Saturday for its first of the season of Star Wars Day at Sea. While sailing on-board during these selected sailings, guests can enjoy meeting their favourite characters and droids from the saga, collect specially merchandise and enjoy Star Wars themed entertainment. Star Wars day at sea are on selected Caribbean cruises from now until the end of February 2020.

New Cupcakes debut onboard the Disney Fantasy and Disney Dream

18th December - During the Very Merrytime Cruises onboard Disney Cruise Line, guests will be able to enjoy brand new merchandise as well as seasonal décor, food and events. Get cosy with their holiday-themed spirit jersey and grey zip-up hoodie. Decorate your own tree with a light-up ship ornament or enjoy a hot chocolate in the holiday tumbler.

10th December - Disney Cruise Line has been named ‘Best for Families’ in the Cruise Critic Editors’ Picks Awards for the fourth consecutive year. Cruise Critic’s team of editors combine first-hand experience with industry knowledge to select cruise holidays that are perfectly suited for every member of the family. With more than 350,000 cruise reviews, that cover approximately 700 cruise ships and nearly 500 worldwide ports, they are able to assess each area to the maximum.

Marvel Day at Sea returns to the Disney Magic

5th December - It’s time to assemble your team of aspiring Super Heroes… Marvel Day at Sea returns to the Disney Magic! On special five-night Caribbean and Bahamian cruises sailing from Miami in early 2020, you can enjoy a thrilling, day-long adventure by immersing yourself into Marvel comics, films and animated series. With activities for the entire family, everyone can tap into their own, inner Super Hero.

21st November - The Disney Magic has arrived in Miami ready for her Winter season. Celebrating with Very Merrytime cruises from now until the 24th December and Marvel Days at Sea on selected sail dates from January to March. Cruises from Miami sail anywhere from 3-night Bahamas to 5-night Western Caribbean. The Disney Magic will call Miami home from now until the early summer when she will cruise the Atlantic over to Europe for the Summer Season.

8th November - This weekend Disney Cruise Line’s fleet begin their Very Merrytime Cruises. Each ship hosts a range of Christmas themed activities with a beautiful Christmas tree in the Atrium and a scrumptious smelling gingerbread house! These cruises will sail through until Christmas Day around the Caribbean. Disney Cruise Line have availability for 2019 and 2020! Sail away on these magical cruises during this festive season!

31st October - While onboard Disney Cruise Line, guests can pre-book another cruise with an exclusive onboard promotion. Booking a cruise in stateroom categories 4A – 11C, guests will receive 10% discount, if this cruise is 7-nights or longer guests will only put down 50% of the deposit required.

Meet Fancy Nancy and Vampirina aboard a Disney Cruise Ship

25th October - Two of your favourite Disney Junior characters are sailing away onboard Disney Cruise Line joining in with all the fun! Inside Disney’s Oceaneer Club, kids can take part in special, interactive activities inspired by these characters. Guests of all ages can meet these fun characters around the ship for a special photo opportunity.

17th October - Over the summer Pandora and Disney Cruise Line have released 4 new beautiful charms exclusive to each ship. The silver dangle charm holds an elegant coloured logo for each specific ship. As they are only available on that ship, you will have to sail across each ship to collect all four. Happy Cruising!

10th October - Before she made her way down to San Diego, the Disney Wonder went in for a 2 week dry dock in a facility close to Vancouver. During these two weeks she gained a new sleek space for teens, a redesigned cafe just for adults and the French Quarter Lounge, complementing the design and feel of the Tiana's Place restaurant.

3rd October - During early 2021, Disney Cruise Line will return to New-Orleans for a limited-time with sailings to the Bahamas and Caribbean, including visits to Disney’s private island paradise, Castaway Cay. Across the Disney fleet, cruises will visit tropical destinations from Texas, California and Florida! Booking opens today!

3rd September - Hurricane Dorian brought devastation to the northern Bahamas, The Walt Disney Company is committed to helping the community to rebuild their homes and livelihoods. This donation will assist with recovery and rebuilding efforts, as well as provision of supplies – including food staples and basic construction materials – to those in impacted areas.

'Halloween on the High Seas' begins onboard Disney Cruise Line

28th August - Starting this week, the next 34 sailings across all four ships with be themed to this spooky time of year. Activities will include mask making, trick-or-treating stations and pumpkin carving. Guests are encouraged to dress up in spook-tacular attire just like some of their favourite Disney friends! Families will have endless fun during their Halloween on the High Seas cruise!

25th August - The fifth ship to the Disney Cruise Line fleet is going to be called Disney Wish, she will be delivered late 2021 with first sailings January 2022. Rapunzel will be featured on the stern on this beautiful ship along with her side-kick Pascal. Disney Cruise Line will also be welcoming a new Disney port of call that celebrates the spirit and culture of The Bahamas, located on the breathtaking island of Eleuthera at a place called Lighthouse Point. 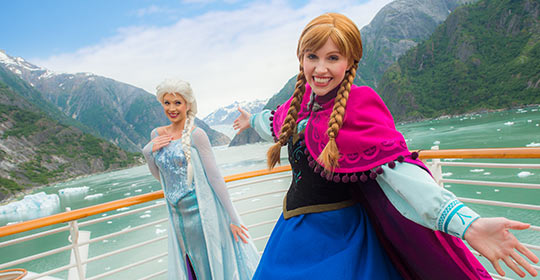 Why book with MagicBreaks?

Question? Chat with us!
This site uses cookies. By continuing to browse the site you are agreeing to our use of cookies. Find out more here.
Close